I am working on a parallel story that is happening in same world as Capture Adventure. This will be released in smaller pieces so you will get contents more often.
I also developed a new workflow that results better pictures with much more details and atmosphere. Let me present these with attached ones. (The finals will be 4K as always.)

A young FBI agent is trying to investigate the increasing number of disappearances of women in Central City. The numbers of disappearances have increased sharply and she proposes an investigation be carried out due to her suspicions that the mob is involved.  Her bosses immediately forbade it and gave an exact order to stay away from these cases, telling her another action team was already on the case.

Months went by and her best friend who lived nearby also went missing. The agent begins to suspect the agency has been corrupted by something big operating in the shadows as they continue to forbid her from working in these cases.  Finally she decides to quit the agency and take things into her own hands.

After some weeks pass she follows clues that lead her to a local asylum that was bought by a corporation months before. Her suspicion of the institution increased when she saw that the date of the purchase conceded with the date of the disappearances.  One night she decides to jump into action and collect evidence to verify her suspicions by sneaking into the building.

Would you like to see more intense scenes?Greetings, I am alre...14 Comments 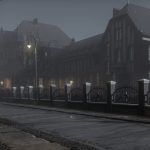