In this scene there was a problem with the darkness of the environment which caused a delay. This time I rendered all frames twice until I found the “noise” levels acceptable. Also I tried to tune all pictures frame by frame as much as I could. But at least at the end of the project I gained some skills and now I know what should I next time around.

In this part we will know some information concerning the experimental mistress creature (called Mi27). An old character is also appearing (she was in Capture Adventure Chapter 9) and we will know more about her intentions.
(I also updated a frame (no.1897) because there was a graphical glitch. I attached this frame to this chapter so you should just overwrite it.) 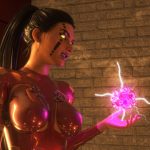