As I explained earlier I will be releasing contents in smaller increments, but more often. For your convenience, this means that the comic release times will become much shorter than the prior release average of once a month. 🙂

For the current week, I’ve just completed another 44 pictures from Capture Adventure Chapter 12. This chapter is still on-going and will be continued with part 3.

“Who will win? The older or the newer version?” 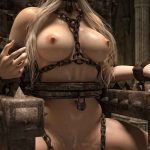